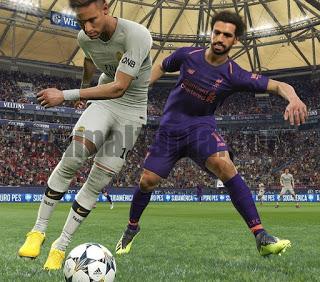 Pro Evolution Soccer 2019 (abbreviated as PES 2019) is a football simulation video game developed by PES Productions and published by Konami for Microsoft Windows, PlayStation 4 and Xbox One.The game is the 18th installment in the PES series and was released on August 28, in North America and for Japan, Europe and Australia on August 30, 2018.

– all modifications now are in the edit file, so Bundesliga is working
– Removed all those cpu traits that I think favored the scripts (in fact since I have this db I had no script)
– Improved traits typical of technical players; therefore, for example, we have the most agile dribblers, the ones who do the tricks with increased dribbling, playmaker with the best ball control
They should make a difference
– Defenders reduced in some values too high, so that in the penalty area they are not unrealistically efficient
– Pulls put to all the various types so they do not just throw stones at the neck
– Defense that removes the ball less easily: both for cpu and user
Attackers and midfielders who return to cover the midfield which is therefore more dense
– Improved head shots for attackers
– Reduced values for small teams so that they play worse than medium and large: now you see the difference (if I have exaggerated, tell me).
– I modified making small teams them less efficient (only serie a for now): bologna, parma, chievo, frosinone, empoli, spal, cagliari. And slightly less efficient: stone, udinese, genoa, torino. The others at default. In these teams I did NOT modify the most significant players; only the less known ones. So small teams do not make over 80% of the right steps as they did before
– I put the tactics of @klashman69 inserted in the db by @ThunderGibson with a fluid module and its settings: I added also modifying the defensive cpu tactics by putting the fluid module to those. In these I also slightly more compacted the departments.